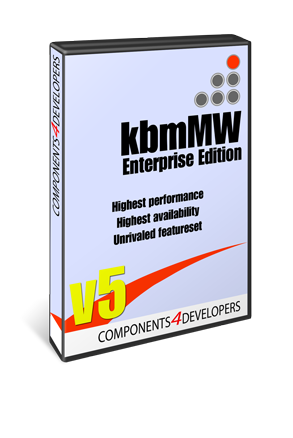 We are happy to announce v5.06.00 BETA of our popular middleware for Delphi and C++Builder.

We strive hard to ensure kbmMW continues to set the bar for what an n-tier product must be capable of in the real world!

This is a major release with new features in addition to fixing reported bugs and enhancing existing features:

Notice that kbmMemTable v. 7.79.00 is a prerequisite to this update.

Professional and Enterprise Edition is available for all with a current active SAU. If your SAU has run out, please visit our shop to extend it with another 12 months.

CodeGear Edition is available for free, but only supports a specific Delphi/Win32 SKU, contains a limited feature set and do not include source.